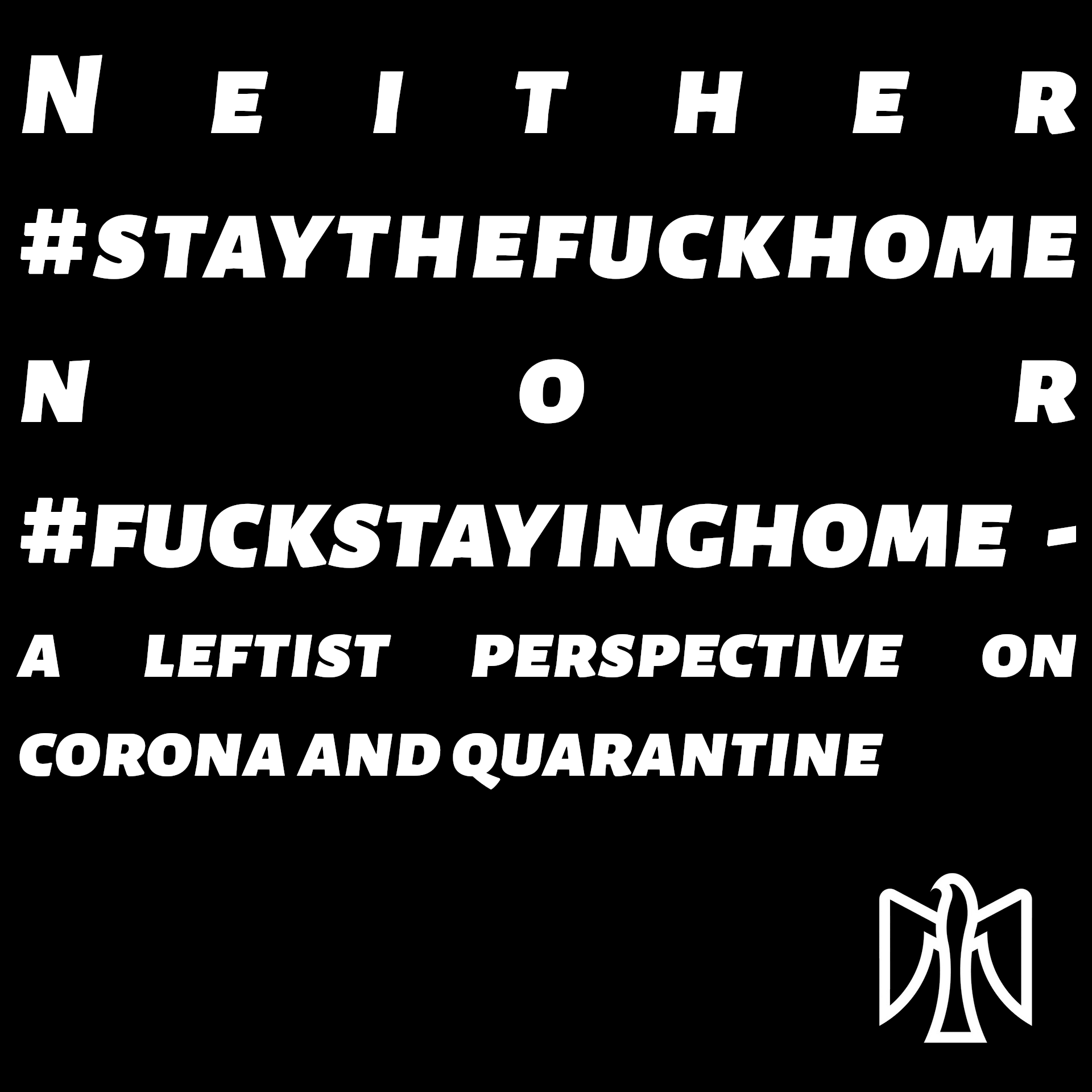 There is something fundamentally wrong with our health care system. Ever since the introduction of flat rate per case payment it has become obvious that it isn’t there to help as many people as possible, and doesn’t have the capacity to be prepared for unexpected changes. Payment is due in correspondence to performed work only and towards nothing else. This could be compared to the fire department only being paid for fires they actually did put out. This situation forces hospitals to run near their maximum capacity all the time. Stocking extra beds, extra staff and extra materials to be prepared for crisis scenarios becomes economically absurd. Even during normal times, meaning normal business as usual, this deeply flawed logic constantly drives hospital staff towards „tolerable“ exhaustion in a calculated way and holds back necessary means of care towards patients.

The market has regulated our health care system following criteria of efficiency, and not around providing care towards human needs. Therefore it has been compromised more and more into its current broken state. This is a direct result of the neoliberal policies of the last few decades that have been passed by the SPD (social democrats), CDU/CSU (conservatives), FDP (liberals) and the Green party. The AfD party (far right) even wants to intensify these policies, because they are a radical free market party for rich big shots. Only a few months ago people were talking about a neoliberal proposal from the Bertelsmann-Foundation which stated that it was necessary to close down hospitals nationwide because of alleged over capacity issues. Now our health minister is boasting about the large number of available hospital beds. But beds and breathing ventilators alone do not treat patients! A small box of chocolates as a thank you present and a heroes rhetoric won’t even come close to giving hospital, nursing and cleaning staff the appreciation they deserve. They deserve higher salaries. The entire situation can be logically derived from the fact that our society is organized by capitalistic principles. We are asking: When is a hospital too expensive? How many people without basic medical care are fine? How much is a human life worth?

The institutional response towards the pandemic is treacherous. Schools, day care centers, universities, cultural places and music venues, playgrounds, the right to demonstrate etc. are closed down first. All while factories, offices and call centers are still up and running. Everything political, social and cultural is supposed to just go on standby, as the production of added value is continued. Everything is done to not endanger the capitalists profit. Closing down a factory only becomes an option when workers already have been infected with Corona (see the Opel factory in Rüsselheim f. ex.) and only with pressure from the unions. As far as we know the german state has not called for the work location to be closed down. So far we have only heard appeals for home offices, and these simply are not feasible for many kinds of work. The majority of businesses are up and running, just as usual. This is the state of the capitalists, its priorities are very clear. It has never been about providing for everyone according to their need and in solidarity. The universal goal is clear: persistence within world wide competition, even within this health crisis.

And of course now care work (childcare, cooking, nursing) is pushed even further into the private sector and is done without payment, as it was before the corona virus. This important work is mainly done by women, and they are doing it without compensation or appreciation. This situation is going to intensify when we are hit with a nationwide quarantine. Violence against women and children will drastically increase when they are locked into their homes with their husbands and fathers because public spaces are closed down. Privacy is not only political but for many it is a daily hell.

And we should not forget that whoever didn’t have a lot of money before this crisis has a higher chance to be hit, and probably will be hit harder by the current restrictions. It’s easier to wait this out in a large apartment rather than in a small one. It’s easier to keep your kids occupied if you own a private garden now that public playgrounds are closed down. When you don’t really have to pay attention to money it’s easier to work around empty shelves at your local supermarket. When you own a car you are not dependent on public transportation.

This pandemic is especially horrendous for refugees. Their journey to a more secure life is hindered with violence. They are being locked up in camps and centers. That Covid-19 spreads further under these conditions is very likely and the EU policies of isolation and exclusion need to be held responsible for this. The hygienic conditions in these camps are terrible. People are penned up and held together, there are very few washing facilities and almost no basic hygiene products. This situation is perfect for the further spread of the Corona virus. The conditions in detention centers and central asylum camps are not quite as drastic but still precarious.

Meanwhile all the media pays attention to is the virus itself; mostly reporting about it without any connection to refugees and the conditions they have to endure. These people are rejected, pushed back, hunted and set on fire by fascists, the Turkish as well as the European border patrol and the police. It is hardly getting any attention.

So far this crisis has produced two main ideological answers and we think they both are wrong or insufficient. Some people are relativizing corona and are saying: „This is all just panic, it is just like any other influenza virus and also its only dangerous for old and previously or chronically ill people“. People that are justifying this position possibly just are relieved that they are not part of these groups at risk and therefore are less in danger. Still, they are reproducing the capitalistic logic of exploitation, meaning that people that (allegedly) are not producing added value are not worth anything. The risk group also is larger than usually presumed. It is often forgotten that disabled people also are part of it. This position basically incorporates the acceptance that the risk group is in life threatening danger. On the other side people are loudly demanding that people should „Stay the fuck home. Everybody should stay at home and do their part concerning the containment of new infections or at least try to slow down the process“. This can’t be taken seriously by anyone knowing that the free market will continue to cost them money for rent and food, and that they will only be able to pay for this when they leave their homes to go to work. As long as we don’t have a complete shutdown with a quarantine basic income for everyone demanding that people „just stay home“ is presumptuous and hostile towards workers and the poor.

We have complete trust in the nursing and hospital staff and everyone else fighting for the dignity and health of the sick every day. We know they are and have been badly compensated for their hard work. These people working in the hospitals, cleaning industry and in retail are at the forefront of this fight, and they have been denied monetary security for years. The constant possibility of deportation or the denial of secure residence titles, short-time work and contract staffing are burdens they carry every day. They deserve our solidarity. We do not trust this economically compromised and broken system, that will not protect us from misery and sickness – we are furious about it.

What we are demanding now:

1. Concerning our federal and provincial governments

– the immediate shut down of all dispensable manufacturing and wagework – a fast and simple quarantine basic income for everyone, financed through the taxation of higher incomes and capital. This will enable people to actually stay at home.

– governmental financial rescue packages for smaller businesses and non profit organizations to enable the continuation of payments towards employees, and furthermore for the (allegedly) self-employed, people engaged in the cultural sector, etc., financed through the taxation of higher incomes and capital.

– the immediate disbandment of all camps at the European border; accommodation for everyone currently living there

– an immediate and considerable raise for everybody working in the nursing industry and in retail and in all other indispensable industries, furthermore obligatory extra-pay in times of danger, payed by the employer. Without this all these benevolent statements just were hollow taunting.

– an aid package for more women’s houses and apartments, so that women and children threatened by their violent husbands and fathers can relocate during the quarantine

2. Concerning all wage workers and the general population

– if possible, stop going to work

– do not sign any type of „amicable termination form“ from your employer. They are trying to rip you off!

– build up collective pressure with your workforce and with your union towards a health strike: collectively enforce quarantine.

– divide the accumulating care work within your private life into just and reasonable parts. This means that many men have to actively depart from their usual patterns concerning house- and care-work, without waiting for explicit requests. Furthermore men should start actively participating in the planning and overseeing of all housework, it is not enough to play with your children for a bit and then leave everything to your wife again! Women, do not accept inequity.

– build up solidary structures and networks and invest into them! Support people that are part of the groups at risk, help them with their daily (shopping) routine

– remember your friends, comrades and everyone else you know that is hit hard by social isolation and possibly driven towards loneliness. Provide emotional support.

– while building your networks, do not cut back on your politics! show others that you are solidary leftists and earn their trust – denunciate the state and the free market and propose alternative ways of living together!

– if you are quarantined, use your time to educate yourself and others

– and always remember: times of crisis are the crossroads of history – of course we socialists have to prevail in these uncertain times, the alternatives are barbaric. Let us seize this chance to fight for a solidary life for everyone.